By John Carter on Wednesday, October 25th, 2017 in Market Reports, News for Alberta Landlords. No Comments

RE/MAX Commercial produces an annual report of all major markets in Canada. Below is the summary and link to the full report for the Western Canada Highlights.

John Carter’s perspective: “Alberta is forecast to lead the country again in GDP growth in 2017 and 2018 (CBC article) with predictions largely based on oil prices growing slightly. However the impact on commercial investment real estate demand has already been felt. Retail is the stongest in demand by mostly private investors, with institutions building or buying value add locations or undervalued assets post recession. Multi-Family apartments have been slower than historical with their being a strong difference in value expectations by vendors and buyers. The increased vacancy in multi-family is still being felt from the record setting years in 2014/15 on new multi-family construction permits. With so much brand new product inventory, ‘old stock apartments’ are challenged to maintain rental rates. Majority of multi-family investors are focused on renovations that make their units more competitive to attract good tenants, but most renovations are not seeing a considerable increase in rental rates.” 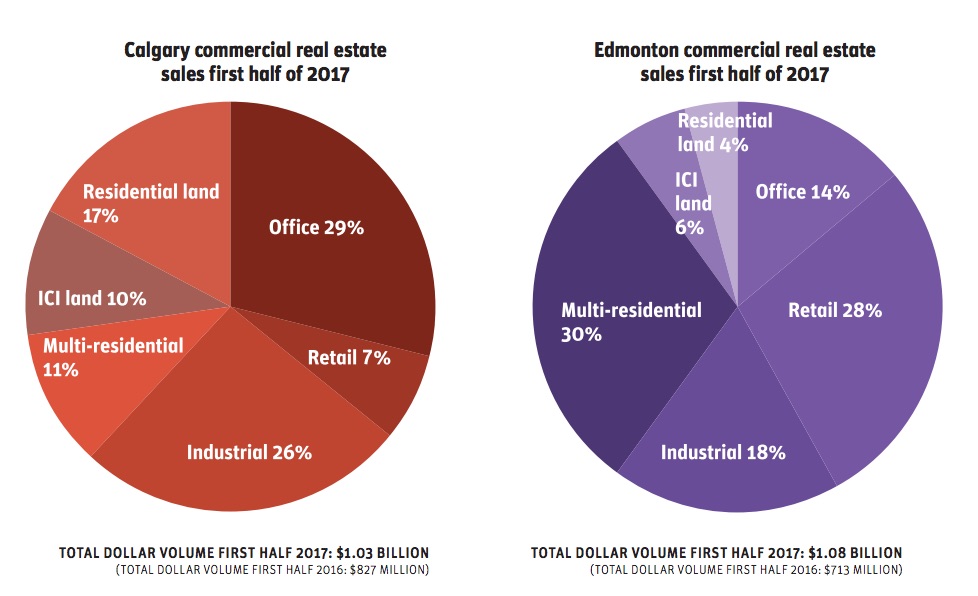 Both Calgary and Edmonton saw strong year-over-year increases in total dollar value of commercial property sales during the first half of 2017 as a result of the ongoing stabilization of the oil sector. In contrast, total dollar value of commercial real estate sales in Greater Vancouver declined by 37.5 per cent during the second quarter, indicating a return to market activity at levels seen prior to 2016, which was a year of record-setting activity. Winnipeg’s commercial market remained strong with high demand across almost all property types, while Regina and Saskatoon slowed due to the ongoing downturn in the commodity sector.

The total dollar value of commercial real estate sales in Calgary in the first half of the year was $1.43 billion, an increase of 55 per cent over the $932 million total in the first half of 2016. Alberta’s capital city also saw significant year-over-year growth in total sales value for commercial properties of 39 per cent, topping $1 billion at the mid-year point for the first time in three years in Edmonton.

“Alberta’s two largest markets have seen strong commercial property investment in 2017, as the worst of the recession that has defined the market over the last few years appears to be over,” says Elton Ash, Regional Executive Vice President, RE/MAX of Western Canada. “Oil prices have remained relatively stable in recent months and the outlook for the province’s economy overall is optimistic. As a result, there is renewed confidence among investors in Calgary and Edmonton and total sales value is up in both cities.”

In contrast to growth in Alberta, Greater Vancouver’s commercial property market slowed during the first half of 2017 after significant total dollar value and activity increases during the same period in 2016. There were 595 commercial property sales in the second quarter of 2017, compared with 875 sales during the same period last year. The slowdown in activity is due to a lack of supply across the market, limiting opportunities for investors.

“Demand remains high for commercial property, particularly office space and vacant land in Greater Vancouver, but there simply isn’t enough inventory to maintain the strong activity seen during 2016,” says Ash. “The market continues to be primarily driven by local investors, but there is also strong interest from offshore buyers from Europe, Asia and the United States. New development projects around the waterfront and BC Place are anticipated to alleviate some of the pent-up demand in Greater Vancouver in the coming years.”

Virtually all commercial property types in Winnipeg are in high demand and investors view properties with passive income streams as most desirable. Continued low interest rates have fueled demand, and recent rate hikes from the Bank of Canada are unlikely to slow activity in the market as rates remain relatively low. Overall, the outlook for Winnipeg’s commercial property market for the remainder of 2017 and 2018 remains positive, with strong anticipated demand moving forward.

Similarly, there is optimism in Regina and Saskatoon’s commercial markets despite slowed activity in 2017 due to the prolonged effects of the downturn of Saskatchewan’s resource sector. The positive outlook for 2018 is fueled by the stabilization of the oil sector and the potash industry showing signs of growth over the last few months combined with a variety of development projects currently underway in both cities.